Claude & Val Pauze/ Heathman
Lee Creek, North Shuswap near Chase, B.C, Canada
We went full-time Rving in October of 2005! We retired from full time to part-time as of the end of 2015. Our present "small but comfortable" Wagon is a 2008 Camper trailer(TravelAir Rustler), pulled by a 2008 Dodge Dakota, 4X4.l. Our home is now a Gated Community Park, in Oliver, British-Columbia, Canada. I retired in 2005 and my Life Companion, Valerie, retired October 1, 2006 from nursing. We invite you to follow and share our new adventures and mishaps. Life is but an adventure full of dreams yet to be fulfilled!

You can tell things are getting into a routine....I have hardly anything to report. The park has been very busy this year with hardly any spot open for camping. The street has been full almost every night.

On Friday the 17th, we called Phoenix for Bud's b'day but he wasn't home so we called him the next day.

On Sat. Feb 18, we went kayaking but the wind got too strong so had to come back in. All the same, we had a good time and saw caves and kayaked into it.

On Sun the 19th, we both went golfing. In the a.m., we went for breakfast on our bikes then cycled into town and ended buying some more decorations for the 5er. A lizard, a frog in a frame and 5 small jugs mounted in a row.

Wednesday the 22nd, it rained on and off most of the afternoon and evening. Not much, but enough to get the road wet.

Today the 23rd, we went to the beach for the day and kayak and suntaned! Tucker went for a haircut...$8.00 later he looked very handsome.

Bye the by, I am writing this from our fifth-wheel as Joe finally raised the antenna for the WI-FI which makes my reception much better.....FINALLY!!!!!!!!!!

I just realized that it;s been over 10 days since I made an entry in here. Getting slack....we are soooooo busy, what with sunning ourselves and drinking cerveza.

Anyway, here is an update and I've also added more pictures of our parties and SuperBowl.

Speaking of which, that was the fifth. The day started with breakfast at Rosa cantina and ended at the hotel watching the super bowl. There were 10 couples just in our group alone. We lost our game but Linda had the opportunity to rub it in as she was for the "other" team.
Tucker licked his paw raw again so had to put some medicine on it. He gets little grass blade stuck in between his toes which irritates him

On Feb 8, wednesday, Val went to the dentist to get some minor work done. Sure is cheap here for dental work.

Feb 11, Sat. we had the go-away party for Dave and Julie. A very nice couple we met here and with whom all the dogs have taken to because of the treats he has to give them. A good times was had by all and we got him a t-shirt with all the dog,s paw stamped on. They are leaving tomorrow.

Feb 12th, Tucker was sick again with the flue. Made a runny mess in the kitchen and on the carpet in the living room. What a pleasant way to get up to!!!!! We took him to the vet on Monday the 13th where he got a shot and put on a diet. He was supposed to get three shots but on the second day, the vet missed and got him on a nerve or bones so he was really sore and couldn't walk on his leg for a couple days. Needless to say, we didn't' go back for the third shot. He is now on a diet of rice, chicken and yogurt.
We also attended a small Valentine reunion under the park's palapa which the owner, Joseph, put on for everyone. Free magarita and beer and everyone brought something to munch on. That evening, we all went to the Real Hotel by beach 22 and had a drink by the ocean and a great dinner at Joey's in the Hotel. We were 4 couples; the Holder's, the Johnson's, us and Brenda and Al. It was an excellent evening.

On wednesday the 15th, Tucker showed some big improvement and started put weight on his right leg. His poop is also much better. Val fell off the cement pad which serves as our patio, while sitting in her chair whcih was just a little too close to the edge. She messed up her wrist and scratched her forearms.
If it's not one thing, it's another!!!!!!!! 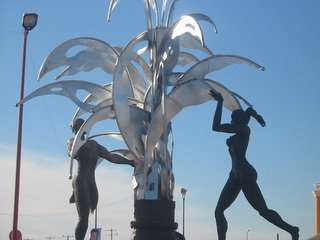 Today, the first, was very hot. It clouded in p.m. and cool off a bit but still very warm. Check-out our account and all moneys are in so we can live again. ahahahah

On Feb 2, Thursday, we went to Obregon with the kirkby's. Shopped at Wal-Mart and Sam's club which is just like a Costco. We bought some stuff but it was a bit disappointing. It is a beautiful city of approx 400,000 people. We went for lunch in the open market and walked some streets then headed home. Got back at around 5 p.m....just in time for happy hour. Obregon is approx 145 km (90 miles) from San carlos.

Friday, Bev and Glen left in the A.M.

Saturday the 4th was another hot day. I washed the roof of the 5er in the a.m. There was a small breeze coming from the ocean which was very nice.

Check out the pictures as I have added new ones. 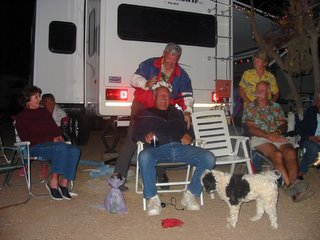 On Thursday, the 26th, it was celebration day as the Holder's friends, Glen and Bev, arrived from California. IT is a celebration as they are bringing supplies we asked for such as wine, cereals, my fifth wheel skirt and other important things. We went out to Froggy's for pizza that evening
Sunday, we went to Empalme to look at the open market. It was interesting but didn't buy anything. Monday, I installed the skirt for the 5er. It looks great.
Tuesday the 31st, Val went to the dentist as she is having some pain. It was also Al's 60th birthday so another fiesta. Good turn out and lots of fun....CHECK OUT THE PICTURES
Posted by Claude & Val Pauze/ Heathman at 12:33 pm No comments: